When Gen and I made those fish tacos not long ago, I had red cabbage left in my fridge and had no idea what else to cook with it, and wasn’t really inspired. So I did what I always do when I have left over veggies, I made some juice. I went online to find a simple but tasty juice recipe with red cabbage and found the BBQ Blow Out juice recipe on the Joe Cross’ Reboot with Joe website. Although the juice tasted very good, I wasn’t a fan of the smell (it is red cabbage after all) so I probably won’t use that vegetable to make a juice anytime soon.

For those of you who aren’t familiar with Joe Cross, he’s the filmmaker known for the Fat, Sick & Nearly Dead documentary. In this film, he tells the story about his struggle with his weight and an autoimmune disease he suffers from, and rather than dealing with his condition with medication, he decides to go straight to the source of the problem and try to heal himself with nutrition. So he goes on a 60-day juice fast, supervised by his doctor and regular blood tests and travels across the US, meets people and talks about their eating habits. After the fast, he is able to lose 100 pounds, significantly drops his cholesterol and his autoimmune disease disappears (he was able to decrease his medication dosage gradually during the fast, before completely getting rid of it).

Now don’t go thinking I started juicing for that reason only. I’ve always loved fruit juice but prefer the taste of fresh-pressed juice over store-bought juices. I remember as a kid, going back to my native country and getting fresh carrot juice from juice stands you can find at almost every street corner. I’ve always loved fruit juice. But let’s say this documentary played a role in my decision to buy a juicer, which ended up being a great investment as I now drink fresh-pressed juices at least 3-4 days a week. I also love making my own juice combinations and Reboot with Joe is perfect for that. You can start by trying some of the recipes from the website and eventually, the more familiar you get with it, the easier it gets to create your own recipes.

Anyways, you can check my favourite recipe here, and I’ll definitely be posting more of them in the future. But for now, here’s a pic of the red-cabbage-based recipe I mentionned in the beginning… 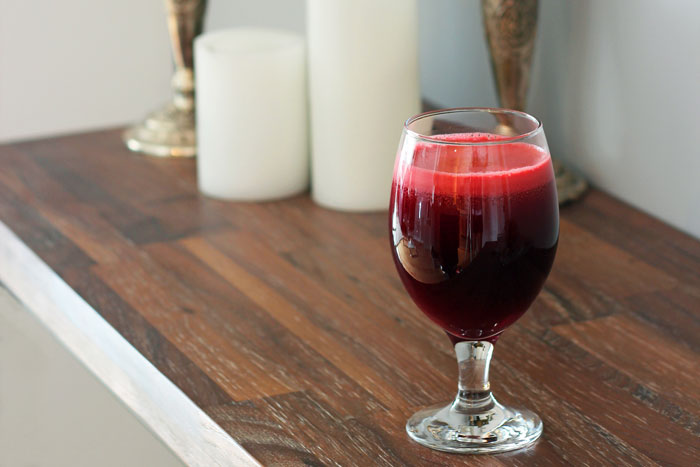