I had heard about its $4.95 menu and wanted to give it a try, so when a friend suggested it for a dinner night out two months ago, we went for it. I had the roasted turkey breast sandwich, which was OK (forgot to take a pic), and the cinnamon dusted sugar mini donuts served with an espresso toffee sauce for dipping. I found the donuts to be way too dry for my taste. As for the ambiance, it didn’t do it for me AT ALL. The crowd is way too young, I felt like I was at a bar in Tremblant with a bunch of teenage snowboarders. They were way too loud and so was the music. I was there to have dinner with some friends I hadn’t seen in a while and we were hoping to catch up on things, but that didn’t really happen as I couldn’t hear half the things they were saying… I guess the food is OK if you’re in the area and need a place to grab some lunch, especially in the summer as they have a terrasse. But personally, I won’t be going back, especially not for a dinner night out… too many other restaurants to try on my list. For those interested: L’Entrepôt Mont-Royal | 1019, avenue Mont-Royal Est. 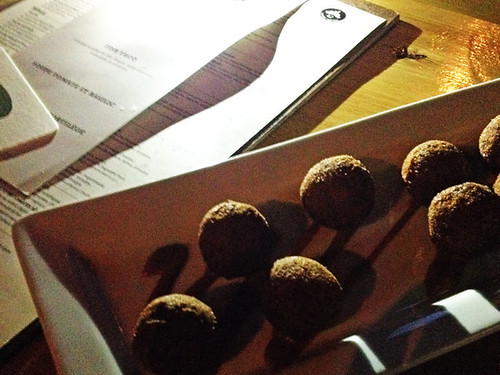